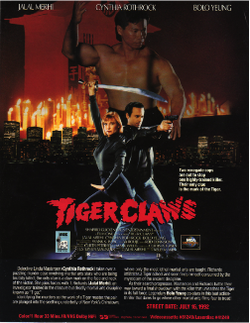 In this film from the latter stage of the golden era of kung fu films. Detective Linda Masterson, played by the contemporary martial arts misstress Cynthia “blonde fury” Rothrock, takes a puzzling murdercase involving a martial artists who are being brutally killed, and left with the killer’s calling card of claw marks on their face. She joins forces with Tarek Richards (Jalal Merhi), an investivator trained in the obscure, but deadly martial arts disipline known as “Tiger”. Identifying the murders as the work of a tiger master, the pair are taken into the underbelly of New York’s Chinatown.